The Charity operates in nine local authority areas, known as the Beneficial Area.  The beneficiaries of John Lyon’s Charity are the inhabitants of the following London boroughs: Barnet, Brent, Camden, Ealing, Hammersmith & Fulham, Harrow, Kensington & Chelsea and the Cities of London and Westminster.  See map below: 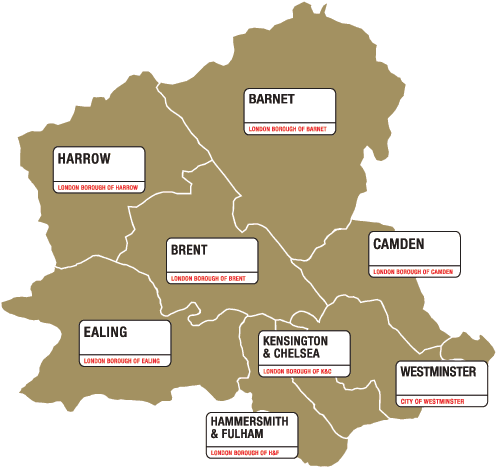 These boroughs are linked by their proximity to the two roads that were the original beneficiaries of the John Lyon Road Trust: Harrow Road and the Edgware Road. The Rules that govern the Charity’s grant-giving stipulate that 25% of grants awarded should be made to projects in Brent and 15% to Westminster; after that, each borough should receive 10% each.

Since 1991, the Charity has had the opportunity to develop deep relationships with all the stakeholders that work with Children and Young People within the Beneficial Area.  Our consistency in the boroughs over the years has reaped the reward of being considered a valued independent voice, trusted by organisations from every sector.