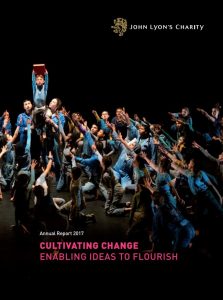 In our 2017 Annual Report, we celebrate the contribution that the Charity has made above solely ‘grant-giving’ to the development of a number of key projects and initiatives within the Charity’s Beneficial Area. Featuring: English National Ballet, Primary Shakespeare Company, quality marking with the NRCSE and London Youth, Young People’s Foundations and Schools Counselling Partnership. Each of these organisations has enthusiastically embraced the expertise offered by the Charity and this true partnership approach has has led to the development of innovative, ground-breaking, high-quality projects for children and young people. 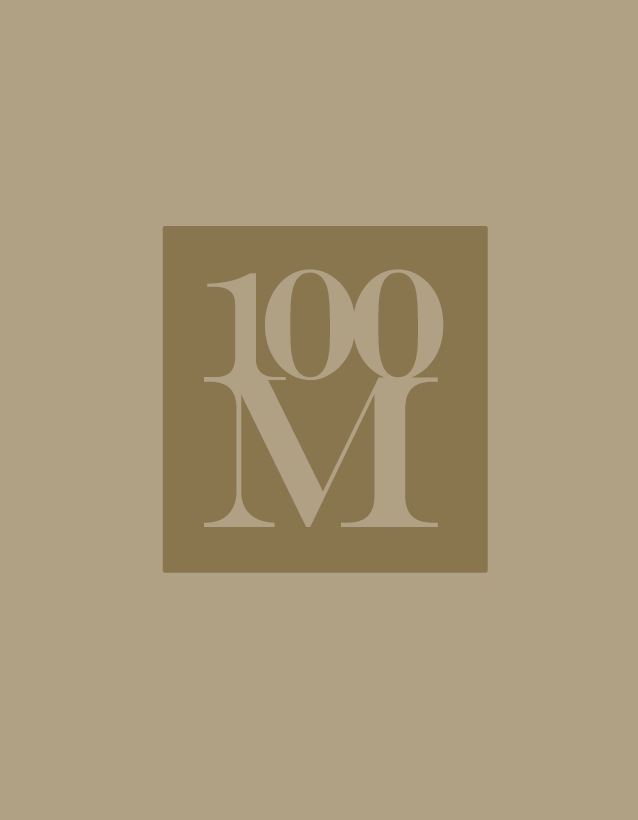 This book is the Charity’s celebration of awarding over £100 million in grants since 1991. It features 100 projects to celebrate the £100 million milestone with vivid, colourful imagery of the breadth and quality of work with children and young people across our Beneficial Area.

The £100M book was released during our celebration event, hosted at Westminster Abbey on 27th September 2017. 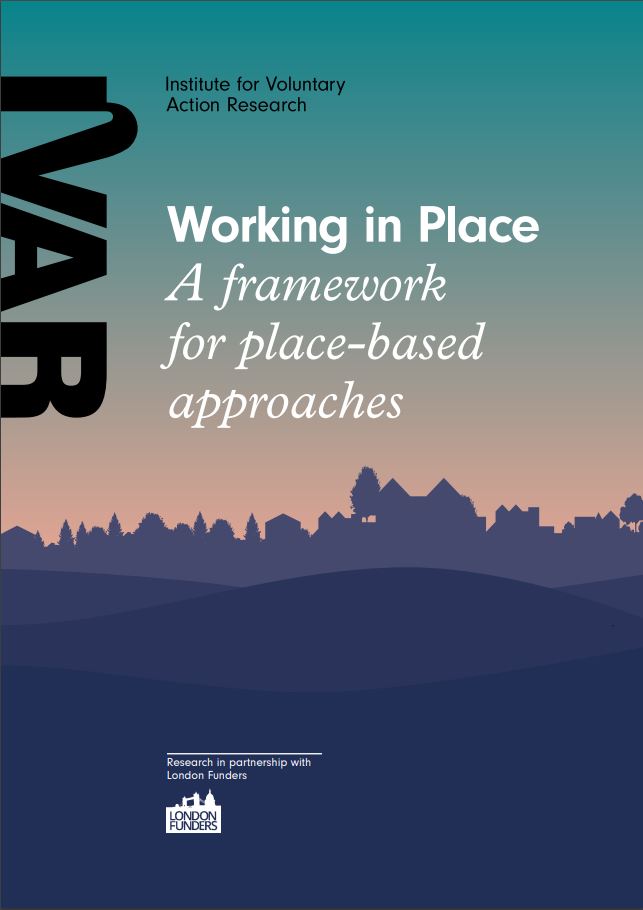 Working in Place: A framework for place-based approaches
(IVAR, 2016) 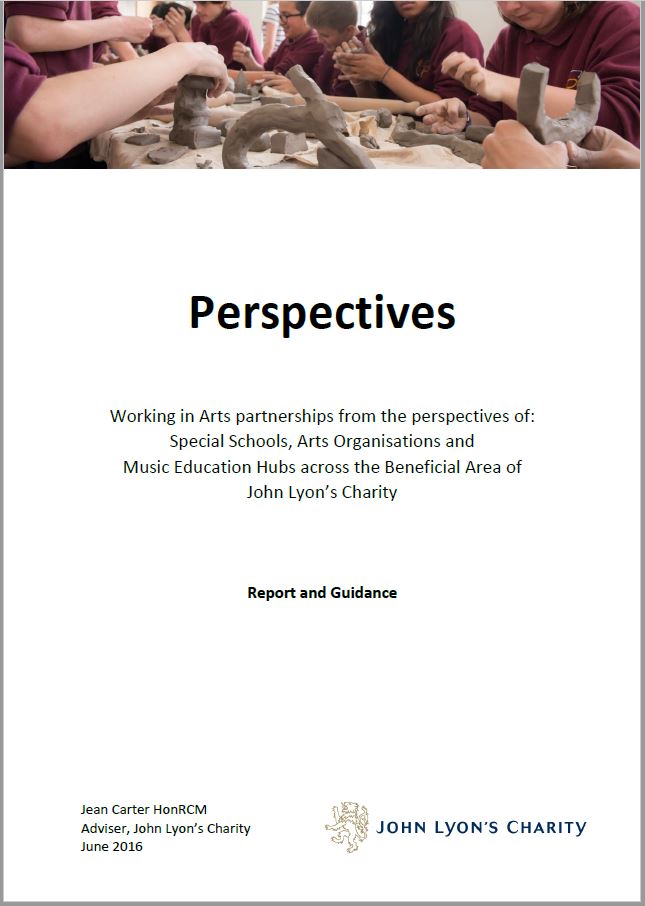 We are pleased to announce the launch of Perspectives, a report that collates the responses of Arts organisations, special schools and music education hubs to questions on what makes good and effective partnerships.  The research and report was produced for John Lyon’s Charity by the Charity’s Adviser, Jean Carter.  Jean has many years’ experience working in the Arts sector, most recently as the head of the Tri-Borough Music Hub until 2014.

The report outlines – in the words of those working in each of the different sectors – what factors matter to them most in delivering Arts projects: what their priorities are, what they perceive the barriers to be and what they see as the main roles of the different members of the partnerships.  It is designed to inform those working in the area and to give confidence to those who have not yet engaged in the process.

Perspectives was launched on Tuesday, 28 June 2016 at Lyric Hammersmith.  The event was attended by over 70 representatives of Arts organisations, special schools and Music Education Hubs in the Charity’s Beneficial Area.  There were also representatives from other funders interested in working in this field. Click here to read the full report.

Invest in Quality: an evaluation of London Youth’s Quality Mark 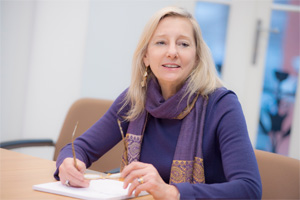 “A tool such as the Quality Mark, which meets the needs of youth clubs and youth work providers at a time when resources are increasingly scarce, is critical. John Lyon’s Charity is proud to lead the way and hopes that other funders will recognise the rigour and hard work that youth clubs undertake to achieve the qualification, and the significance it holds as a trusted badge of excellence.”

The evaluation report affirms what we at JLC have long believed: that the Quality Mark helps ensure good youth work!

Click to read the summary and the full report. 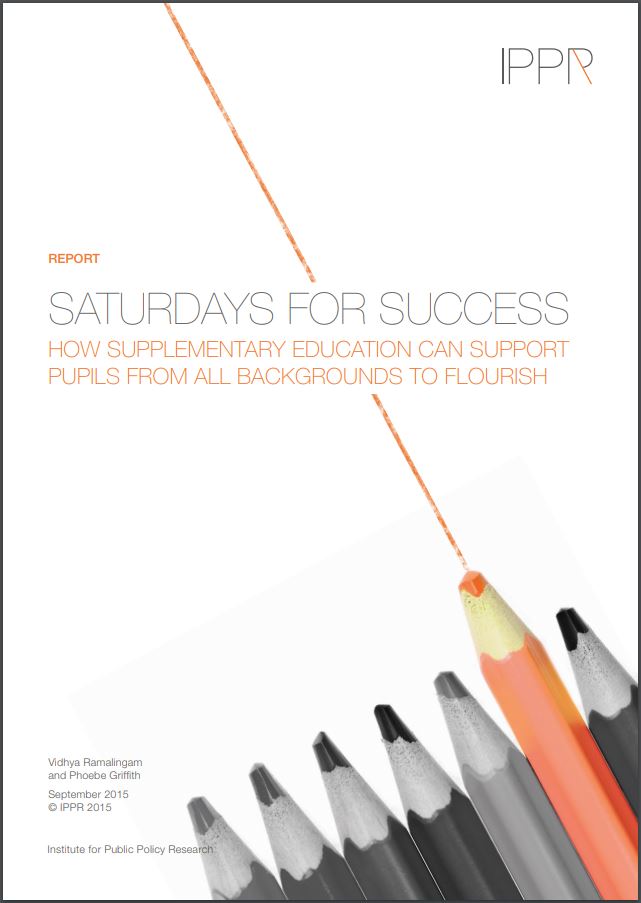 Saturdays for success: how supplementary education can support pupils from all backgrounds to flourish

On 17th September 2015, the Institute for Public Policy Research published its latest research into supplementary schools and important role they can play in supporting the mainstream school sector.  Mainstream schools can benefit in a number of ways from the work of community-led educational programmes and this report makes recommendations for how pupils, schools and communities can gain from the rich, extracurricular learning environments that these ‘supplementary schools’ offer. The report was funded by John Lyon’s Charity.

Click here to read the full report. More information on the Charity’s work with supplementary schools can be found here.