Congratulations to Mosaic LGBT Youth Centre! They sped away with the win in this very fun picture!

Congratulations to Sidings Community Centre! We loved the fancy dress and have given John points for taking part….we’re not sure he scored many against those impressive sumos!

Congratulations to The Pirate Castle! They got a splashtastic 22 young people in a photo with John on the water. 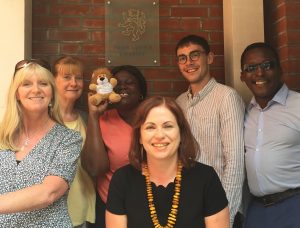 The JLC Team with John the Lyon

This year’s School Holiday Activity Fund (SHAF) round for the summer was injected with a lot of furry fun, as we introduced the newest member of the JLC Team: John the Lyon. John just loves activities and so groups that successfully applied to the summer SHAF round were challenged to take photos of John on their trips and activities, while sharing photos of their awesome antics on Twitter using the hashtag #JohntheLyon. Pictures were then automatically entered into our prize draw for £100 pizza vouchers for the winners of each category:

We have been amazed and impressed by the fun, frequency and imagination of the photos – many of which have been puntastic! #JohntheLyon thinks “they’re all grrrrrrreat” and has been chatting non-stop about the huge variety of activities he got up to, from paintballing to sumo wrestling, kayaking to cooking and t-shirt making to dancing – he even won a few certificates in the process!

While our amazing winners are featured above, we’d like to say a big thank you to the following 31 groups for participating. Many of their pictures are also featured in the gallery below:

John the Lyon has been on so many weird and wonderful adventures, that this page wouldn’t be complete without highlighting a few of the stories behind the pictures: